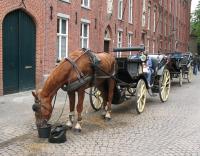 Bruges is one of several European cities dubbed ‘the Venice of the North’. It’s a lovely town with a well-preserved medieval center which includes several canals.

I found a small hotel, the Hans Memling, on the Web, centrally located just a hundred yards or so from the main (Markt) square and my room came with a sweet surprise that had nothing to do with the hotel and everything to do with location. My room, on the ground floor, faced the side street and each morning before breakfast, the measured clip-clop of horses on the cobblestones drew me to the window and I watched the animals and their open-top carriages glide past on their way to ‘work’. They were headed for the square  where they would take up posts alongside one another, to be hired by visitors wanting to see the old town by horse-drawn carriage.

The medieval center of Bruges is compact enough for walking but with so much to see that it requires at least a couple of full days to do it justice. I was in Bruges for 3 nights, but only had one full day for seeing what Bruges had to offer. Even skipping the museums meant leaving for my next destination having missed several of the best attractions. I just needed to plan better and, as always, I assume that I’ll return.

Riding the canal boat gave a canalside glimpse of the ancient buildings as well as the rear gardens of private homes, the kinds of properties that make you think “I would LOVE to live in THIS house!”. There were also sculptures of different materials along the route that you would not see any other way.

A flea market along one of the canals had an assortment of local food products, artisans with their products and tents filled with old ‘junk’ that, while interesting, was mostly either too heavy or too big to fit even the largest suitcase, to say nothing of questionable usefulness – but when has that been a reason to buy at a flea market? I found the market after the canal ride ended; one of the artists was selling her small, framed watercolors of Bruges, a perfect souvenir – original, not fragile and small enough to fit in my bag no matter how full it got. This is now my favorite kind of souvenir to seek out when I travel.

The hike up to the top of the Belfort bell tower on the Markt square is a regular cardiac workout. The 366 steps up a narrow circular stone staircase can be broken up into a couple of segments; there are a couple of rooms near the top where you can stop to examine ancient artifacts, read about the town’s history AND catch your breath before tackling the stairs once again.

At the top, the square and the town beyond spreads out below you in an awe-inspiring (OK… breathtaking or, more accurately, breath-restoring) panorama. The tower summit is open to the air, refreshing on a warm day but be aware of the time. There are several carillon concerts during the day, beginning at 2.15 pm and you are cheek by jowl with those huge bells up there! If you’re on the ground, your best spot for listening to the bells is sitting on a bench in the Belfort’s courtyard.

When you get back down to street level after your workout, queue up, guilt-free, at the frites cart and restore your energy with some Belgian frites, smothered with a gob of mayo the size of a baseball! The long, low,  semi-circular wall on the square has bike parking on the back side and a long bench on the side facing the tower. Plop down on the bench to scarf down your fries and contemplate the tower you just conquered or just people-watch for a few minutes.

The Begijnhof is a serene, tree-filled walled community where unmarried women went to live. Unlike a convent, this did not require the women to take vows. Signs inform visitors to maintain the silence as they stroll on the paths among the mature trees in the central courtyard. The entrance gate is reached by crossing a small footbridge that arches over one of the canals.

The Church of Our Lady (Onze Lieve Vrouwekerk)  is filled with paintings and tombs, some locations of which I think required admission but I’m not positive about that. There was definitely no charge for the church’s most valued possession – the smaller than life Madonna and Child by Michelangelo; a placid Mary gazes down indulgently at the Child squirming on her lap. This sculpture easily outshines its surroundings and it’s obvious that
whoever posed for this Mary was the same person who posed for the more famous Pieta
in the Vatican; the one which made the hugely successful visit to the 1964 World’s Fair in New York. While the dark paintings appeared to suck up all the light around them, this Madonna and Child seemed to reflect and increase the light that hit it. Unfortunately, I got to the church just a few minutes before they closed the doors for the night, so I don’t have a photo of the Michelangelo. Next time.

There are loads of shops making and selling chocolate, that most fantastic of Belgian products and the  Half Moon brewery, which makes that OTHER fantastic Belgian product has guided tours but the brewery closes in mid-afternoon, so keep track of your time if you want to take this tour and indulge in the sampling afterwards.

This entry was posted in All Suzanne's travels, BeNeLux and tagged benelux travel. Bookmark the permalink.