Woodstock – one of my favorite towns in England

Woodstock‘s fame comes in several varieties. It is where you’ll find Blenheim Palace, Winston Churchill’s family estate. If you’re an Inspector Morse fan, you’ll know that it features in one of Colin Dexter’s books, Last Bus to Woodstock. The town hosts a literary festival in September. I’m not the only one who loves Woodstock just as it is… the town is a UNESCO World Heritage site, as is Blenheim.

Less well known… OK, not known at all except in my own mind… are a couple of visits I made to Woodstock, starting with my very first trip to England in 1990. This is from memory and my photos until I can find my travel journal for verification.

I went to Woodstock especially to see Blenheim. The very, very long driveway leads from the gates, past huge lawns that are constantly cared for by a grounds crew of mostly sheep.

The front of the building is one of a kind. A curious sculpture, to one side of the wide front steps, depicts a pile of apparently discarded weapons and Roman armor. Blenheim’s exteriors have been used as locations in several movies over the past 30 years including Harry Potter, Entrapment, Young Victoria and at least one Inspector Lewis TV episode. The foyer furnishings, sculptures, marble floors are in keeping with the scale of this English Baroque ‘pile’ but I found myself increasingly bored with the ostentation. I really shouldn’t have felt that way. After all, it’s not the family’s fault that ancestors won a battle in 1706, and received this grand palace as a thank-you from Anne, the queen at the time. It reminded me, perhaps unfairly, of the cottages (aka mansions) in Newport, RI. Then again, this ain’t the USA. A better student of history would know exactly why this family, as well as others in England and other parts of the UK, were expected to flaunt it if they had it. A common impulse, but the results are often too similar to be interesting.

But enough about my prole hangups. It is a spectacular piece of property and if you are a Winston Churchill buff, there is a permanent exhibit detailing his life and accomplishments here The expanse of garden is huge and beautiful enough to qualify as a national park in most parts of the world.

The 17th century town center still survives, filled with little shops, pubs and hotels. Woodstock is only 8 miles north of Oxford and there is frequent, direct bus service between the two but I had a rental car on each of my visits. In 1990, there were packages that included hotel stays along with the plane ticket. The deal was – if you prepaid a fixed amount for the hotel rooms when you bought the plane ticket, you got a booklet of vouchers, one for each night and good at any of the participating properties. You could choose where you wanted to stay each morning at checkout time. No commitment to a particular place for a particular date. Brilliant. Of course, there was always the chance that the place you wanted to stay was fully booked, but there were always recommendations for other properties; all of the hotels were part of the same chain (Trusthouse Forte, as it was then known). In addition, certain hotels had a surcharge in addition to the minimum price you had paid with the plane ticket. For a ten-day trip, I think I only paid the surcharge once.

On the day I drove to Oxford and Woodstock, I booked a hotel in Woodstock for 1 or 2 nights. The hotel, the Bear, is an old coaching inn dating back to the 13th century. Yikes! The inn, like Blenheim and the other buildings in Woodstock, is built of Cotswold stone, a cream-colored limestone that ivy loves. Stunning, romantic and absolutely perfect.

I was staggered to think I’d be staying here. I don’t remember if they added the surcharge but even if they had, the price would still have been a steal. One interesting feature – and everything about the place was interesting in an English time-machine sort of way -was that many suites had their own street entrances, rather than being accessible from the lobby. I stayed in the Pine Suite and its entrance (the doorway in the right-hand photo) opened onto a separate foyer leading to two suites, one of which was the Pine, a few yards beyond the main hotel entrance. The suite’s picture window overlooked the main street and everything about the place was so romantic I wished I had been with some nice guy to complete the experience. (Heavy sigh).

Although it was called a suite, it was really a large room with a dressing table in front of the

window, another small table and chairs you could use for room

service, two twin beds pushed together (a common thing in Europe; when you want a room for two people, be sure to specify whether you want a double – one bed or a twin – two beds). 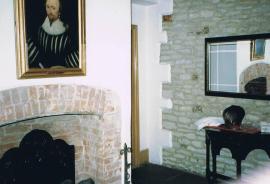 Inner foyer with door to Pine suite to left of mirror

The hotel is famous as a destination in itself because of its proximity to Oxford, the town’s UNESCO-recognized condition and some celebrity affiliation: the Marlborough Suite, complete with four-poster bed, was used by Richard Burton and Elizabeth Taylor but not while I was there.

The shops in the center of Woodstock sell all sorts of stuff, from antiques to Aga stoves to childrens toys. There are realtors and a glove museum (an ancient industry in Woodstock) and several pubs. The modern places, like supermarkets, are outside of this old village area, so the atmosphere isn’t spoiled.

The restaurant at the Bear was beyond my budget, so I ate around the corner at the Punchbowl Inn. 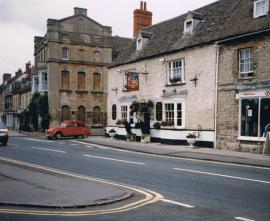 Woodstock street and the Punchbowl Inn

At the time, I was making it my business to sample as many English ales as possible. The Punchbowl Inn, an achingly atmospheric pub dating from the 18th century, served Flowers Bitter, a brand that may no longer exist or, if it does, is not the same brew when it was acquired by Whitbread, one of the big super-breweries. An idea for a future trip is to go to the UK between September and November and visit at least one beer festival. Thing is, though, I’ll have to get in shape first. I don’t mean aerobically, I mean alcoholically. I have gotten out of the habit of drinking beer and it goes right to my head these days.

About ten years ago, I visited Woodstock again, but only for the evening. Some of the shops had changed, but the Bear was still there, the ancient streets still looked like something from an English novel (ignore the cars) and the pubs were still doing well, even if the beers were different. On that second visit, the pub I chose was the Kings Arms. It has low ceilings with exposed beams and stone interior walls and, like the Punchbowl Inn before, didn’t mess up the ambiance with loud music. Mind you, I’ll have to revisit before too long for a quality check.

Interesting afternote – Less than a year after my visit in 1990, Colonial Homes magazine in the US had a cover article comparing Woodstock, VT with Woodstock, England. Imagine my surprise seeing the article but I was stunned when I opened the magazine and saw photos of the Pine Suite in all its glory!

This entry was posted in All Suzanne's travels, England and tagged UK travel. Bookmark the permalink.