Seeing Normandy with a veteran – Day 3 and final thoughts

Following breakfast on our last day, we spent an hour examining the Bayeux tapestry. This historic relic, more than 200 feet long, is mounted in a protective, low-lighted case in a darkened room. A recorded narrative on a cordless handset tells the story depicted on the tapestry. OK, OK, technically it’s a piece of embroidery, but it’s in remarkable condition for being almost a thousand years old and brings the Battle of Hastings to life in a way that written histories can’t.

After Bayeux, we followed the coastline to Gold Beach at Arromanches and the remains of a Mulberry harbor. Two of these man-made floating harbors were built in England and dragged across the Channel to supply the Allies after the D-Day landings. Completed on site in just a few days, they functioned regardless of the action of the tides.

Their biggest advantage was in not having to secure an existing harbor from the enemy. A foundation of intentionally sunk ships kept the harbors stable. Two ships were unloaded at once, speeding up delivery of supplies and troops. Both mulberry harbors were in use less than two weeks after D-Day but the is one at Omaha Beach did not last long; incorrectly anchored, it was destroyed by a severe storm shortly after completion. The Gold Beach harbor was in use for almost a year. The D-Day Museum at Arromanches has a working scale model of the Mulberry harbor and so much more that I wish we had spent more time there.

After Arromanches we paid our respects at the cemetery at Ranville. The WWII graves are in the churchyard cemetery; many of those buried here are from the British 6th Airborne division. The flowering shrubs were all purple – wisteria, lobelia and phlox. There is a German section, surprising only because I had not come across this mingling before. 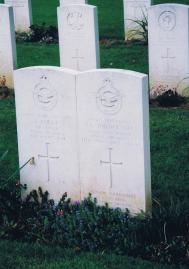 This cemetery was the first place where I saw double headstones. These marked graves of two men whose remains could not be separated. A large number of Scottish regiments are represented here, but maybe I only noticed this because I’m half Scots. 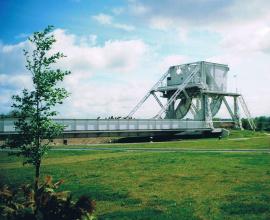 The last stop was Pegasus Bridge on the Orne canal and the adjacent glider drop zone. The bridge sits at the entrance to the air museum nearby, no longer crossing the canal. A replacement bridge spans the water opposite the Cafe Gondrée, the first place liberated on D-Day.

The tour ended at the train station in Caen where Dad and I caught the train back to Paris. Dad had been in Paris for a short time during the war. In civilian life, he worked in the New York office of a French company headquartered in Paris. Paris in 1944/45 was still a war zone but Dad still managed to make his way to the main office to check on the staff, something the company’s owners always remembered.

In the years since Dad and I made this pilgrimage, a lot of the D-Day area has been spiffed up, new memorials added, battle zones refurbished. Much of this was done in preparation for the 60th anniversary in 2004. Dramatic. Impressive. But it is now more than 65 years since the ‘greatest generation’ went to war and still we don’t learn the lesson. The nations of Europe may get along now, but the proliferation of war zones, war dead and living casualties around the world is sickening. There is remembrance but there is also far too much amnesia. We indulge in both, tragically unaware how this contradiction nourishes conflict.

This entry was posted in All Suzanne's travels, France and tagged france travel. Bookmark the permalink.