A summer day in Helsinki

My first full day in Helsinki. I woke up really hungry so made a beeline for the hotel’s breakfast buffet. The selection and quality were outstanding. Remember – Scandinavia invented the smorgasbord. Scrambled eggs, soft boiled eggs, bacon. Cold ham, turkey, beef and several yummy cheeses. Sliced cucumbers and tomatoes. Herring, either pickled or swimming in mustard. Grapefruit, apple or orange juice, coffee and tea. Hot chocolate, too, if I recall correctly. Several dry cereals to top with milk and fruit. Yogurt. A variety of breads and rolls and sweet rolls. Did I forget anything? I didn’t eat every food every day but I made sure to include a little piece of herring in mustard sauce, treating this kind of cultural exotic like Popeye’s spinach to get me through the day.

Any first visit to a European city has two constants for me these days. One is to find the city sightseeing bus, if there is one, so I can get my bearings and get a few early photos out of the way. Typical tourist, I hear you say. Perhaps, but it’s efficient and saves hours thinking you can walk someplace in a few minutes when it’s an hour or more away, a mistake I manage to make when I can’t make a motorized scouting foray. The other constant is that I want to be outdoors, discovering the city and the people and what it might feel like to live there. This means I’m not visiting the museums anywhere near as much as I used to. I tell myself that museums are for the second or third visit. Or maybe even later than that (I didn’t visit the Tower of London until my 5th or 6th trip to London).

a Finnish poet in Esplanade Park

The tourist bus was filling up at Esplanade, the harborside park. There were two stops on this route where we got out for a closer look. One was the Sibelius memorial in Sibelius Park. This large, uneven cluster of steel pipes looks like a pipe organ from Dr Seuss or like stems of musical notes climbing

up and around a curl of invisible sheet music. The second  stop was the Church of the Rock – Temppeliaukio. This modern church’s amphitheater-shaped interior is carved from the surrounding rock. Windows span the space between the rock walls and the domed metal roof and keep the interior bathed in light. The rock walls are the most notable visual feature but the modern design of the entire space is equally impressive and Protestant-spare. The acoustics make it an ideal concert space. Once the bus returned to 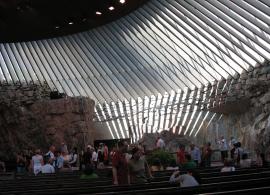 its starting point, it was time to explore on foot. First up, a quick ramble through the quayside market. Handcrafts, hot snacks and cold drinks and food crops are all here. If you get nothing else, you must buy some strawberries. These strawberries are not the tiny wild ones and not those gigantic things we get in the U.S. that look like they were grown with steroids and had their flavor GMO’d out of them. These berries were slightly larger than cherries, bright, uniformly red and fragrant. I could smell them  while still a block away, the aroma so strong and seductive that, by the time I stood in front of the stall, I could barely get the words out – ‘A half kilo of strawberries. Kiitos (thanks)’.

On foot, I crossed Parliament Square, took some photos at the Fiat car show, then up the steps for a peek inside St Matthew’s church. This church probably had the best view of the harbor at one time, but the buildings between the church steps and the harbor are tall enough to blot out all but the tops of the masts of the sailboats beyond the quayside.

Down the steps past the oldest house in Helsinki, Sederholm House, and up to Uspenski, the Russian Orthodox cathedral. This church also sits atop a steep hill, though not so high

up as St Matthew’s. I found a shady spot to sit and finish my strawberries. They were so fragile I thought I would wind up with a baggie of strawberry soup before I’d come out of the cathedral. Even bruised, they were sooooo good!

The fountain that stands between Esplanade and the harbor was brimming with soapy water, the product of an annual student prank. Probably saves money on cleaning costs.

The much-touted Helsinki Card included transport to the Helsinki Zoo but only going the long way ’round on the causeway by bus. Quicker and cooler (and not covered by the Card) was an open-decked boat. Given the glorious sunny day, taking the

boat was a no-brainer. The zoo island is a hilly lump smaller than, say, the Bronx Zoo, with habitat areas grouped by continent. Many enclosures lacked much shade though I have to assume the animals’ needs are more than met. I’m sure I missed much of the zoo because paths looked similar and signposts weren’t always noticeable. I made loops back to the same spot more than once. Several Asian cats got my sympathy vote. Helsinki zoo has a Snow Leopard breeding program, supposedly a difficult proposition. I hope they have more than the solitary snow leopard I saw.

Back at the harbor, I bought another half kilo of strawberries, then strolled over to Esplanade Park, sat on the grass and ate every last one!

A final note – just in case anyone is wondering, I didn’t get a chance to experience a sauna. Yeah, yeah; I hear you saying that visiting Finland without going to the sauna is a wasted trip. It’s on the list for next time; report to follow.