shopping in Helsinki and a very nice dinner

Whether good or bad for my image as a wise globe trotter, I like to go shopping when I travel. At times I just need something ‘normal’, such as tissues or toothpaste. Very often, I’m looking for packaged food that I can either carry with me or take back to the room to snack on while trying to decipher foreign TV shows or else I’m seeking books or a piece of original artwork to bring home. In any case, shopping overseas gives me a chance to experience this activity in a new and different setting. 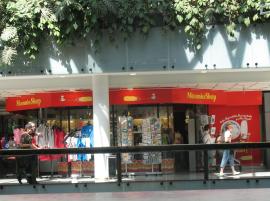 Fortunately, many of the places I’ve visited have so far resisted or ignored any pressure to become American-style malls or, if the layout is familiar, they have not abandoned their local brands for ours. Of course, many European products are familiar because they’ve been exported to the U.S. for ages. The Iitala and Marimekko shops facing Helsinki’s Esplanade Park were overflowing with lovely things in a variety that no American store has room for. My limited budget meant I had to treat many shops like museums – browsing and marveling at what I saw and buying very little or nothing at all and trying not to stress out about it.

The indoor mall in central Helsinki is anchored by Stockmann, the Finnish department store. It took some time to find out how to get to the other floors; I had to go outside and walk uphill a few yards to another entrance to reach the escalator. I think there was an elevator inside, but I couldn’t tell where it would go, since it was in a quiet hallway. I even wondered if the elevator might only lead to offices of some kind.

Once I’d found the interior atrium, the escalators and all the floors were visible and I was all set. The top floor was on the same level as another street (Helsinki does have its hilly sections). A directory listed a hair salon on this top level and I found it outdoors, facing the street rather than being part of the mall itself. This was what I needed.

My hair is short and straight and I’m not terribly fussy about how it’s styled. Wash, towel-dry and a comb is my usual care routine. As I get older, I need an occasional color job to mask the grey. My natural light brown always made me look paler than having a lighter color, so I have stuck with that. That said, I do like to get a haircut before I travel but when I can’t squeeze it in beforehand, it moves over to the ‘get it done on the trip’ list.

The young woman in Helsinki spoke excellent English, which didn’t surprise me. It just embarrassed me that I only had 3 words of Finnish learned on the language video on the plane. Still, we had a nice chat while she cut my hair and it made me feel, in Rick Steves’s words, ”like a temporary local”. Besides, whether the haircut is a good one or a bad one, it’s only temporary! This one was very good and seemed to last longer than my usual stateside cut.

The skylight above the mall’s central atrium made the interior feel part of the outdoors. The summer sun was blazing during my time in Helsinki and because it’s so high in the sky pretty much all day, it looked like noontime for HOURS. Next stop was the Moomin shop. Blog readers may recall another post about the Moomins – characters from a series of children’s books begun in the 1950s by writer Tove Jansson. I discovered these books in my hometown library in Long Island in the late 50s or early 60s and have been on a quest to find more ever since.

The Moomins are as popular in Scandinavia as the Disney characters are in the U.S. The
range of products is not quite so overwhelming, but I managed to spend a good chunk of my shopping budget on T-shirts, cellphone charms and keychains, a coffee mug, a small canvas bag, a set of tea canisters and, with the clerk’s help, a storybook they had in both a Finnish and an English edition. Foreign languages is another interest of mine, so I try to acquire either a small dictionary or children’s book whenever I’m in a country where they speak a different language.

With most of my Helsinki shopping out of the way, I turned my attention to the city itself. I covered those adventures in the ‘summer day in Helsinki’ posting. I’ll post more photos in my next blog post.

Another too-regular feature of solo travel is not eating out very much. Sometimes it’s a matter of the budget, but mostly I vastly prefer eating out when I’ve got company. Every couple of days, though, I add either a lunch or dinner in a sit-down place to my itinerary and I get to enjoy my destination and its food specialties from the vantage point of a table with wait staff.

In Helsinki, I had dinner at the FishMarket restaurant opposite the harbor. The restaurant is below street level. A few tables on the sidewalk were empty the night I went. The interior is Scandinavian-clean in design, pale wood, neutral fabrics, gentle lighting and loads of sparkling, pale blue glassware. Now, I am sure I wrote down what I ate but apparently I didn’t write it in my travel journal. I think I had an interesting salad as a starter and a lovely fish dish washed down with some crisp, cold Albariño, a terrific Spanish white wine. Yes, I had dessert and coffee. When I find my notes, I’ll update this posting. I asked for a souvenir menu, but they didn’t have any and since the menu changes frequently, I would have had to look up the online menu right away. Well, maybe I’ll just have to go back and eat there again. I may skip the reindeer, though. That’s one of the entrees on the current online menu.

After I returned to the U.S., I heard about a Helsinki attraction called the Spårakoff  Pub Tram. Hop on, pick up the beer included with your ticket and take a seat while the bus makes a leisurely 40 minute loop around the city. I definitely have to do that next time!