Prague beyond the Christmas markets

Prague (Praha), like most large cities, is a collection of neighborhoods, each with its own history, flavor and identity. It can be helpful to know the English names, but what you really need to do is match up the street signs with map names. This makes life much less stressful when you’re in a place like Prague where English ‘subtitles’ are not guaranteed and the language is not Latin-based. At least they use the Roman alphabet in the Czech Republic. Deciphering signs written in an entirely different alphabet, such as Cyrillic in Bulgaria, makes for a whole ‘nother level of puzzle-solving. 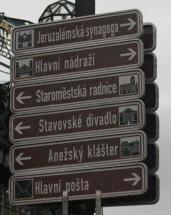 a Prague signpost; match up with your map!

The area east and south of the curvy stretch of the Vltava River is the oldest part of the city. This is where Stare Mesto (Old Town), Waclavske Namesti (Wenceslas Square) and  Josefov (Jewish Quarter) scrunch together.  A city wall once surrounded the area, a wall that is pretty much gone. The most obvious remnant is the Powder Gate, still covered in soot, except for the gold statues gleaming on the upper tier. There are some old ramparts along the riverbank, but I don’t know if these are remnants of that same wall or not.

an alley in Josefov

Adjacent to the Gate is the Prague National Theatre, a beautifully decorated building that is home to opera, theater and ballet. The walking tour I took only had time to stop outside for a brief history and we were urged to return to see the interior, even if we didn’t have time for a performance. Alas, it had to be put on the list for next time. The Rudolfinum concert hall is equally majestic and holds a spot for a future trip as well.

Facing the Stare Namesti (Old Town Square) market, the Tyn church and its lavish, Baroque interior attracts visitors even if all they come to see is Tycho Brahe’s grave at the altar. Born in Denmark, Brahe left Denmark to become the imperial astronomer in Prague, where he later died. A priest roamed the church aisles, making sure the no-photography rule was followed and the men removed their hats. They have booklets on the church available in several languages; I bought the English version and put some extra coins in the box as I left.

Across the river to the northeast is the hill (Hradcany) that holds Prague Castle and St Vitus Cathedral. I wrote about this in a previous blog, with photos. This part of the city is designated Mala Strana (literally, ‘lesser side’). Much of the long walk downhill towards the river takes you through parkland. This is where I saw leafless shrubs covered with white berries about the size of large peas. I think this was winterberry, but I’m not sure. I know it wasn’t mistletoe – the berries were not waxy; besides, mistletoe grows in large round 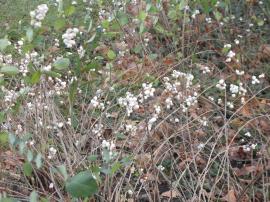 white berries in a park near Prague Castle

clumps high up in trees. A ridge continues southwest from the castle and has some additional spots to explore, though I didn’t make it over there this time. 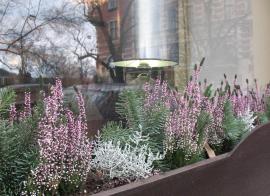 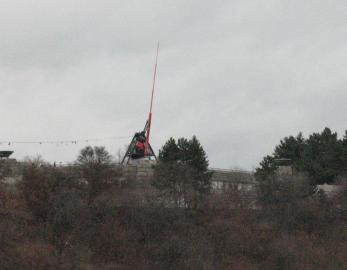 A giant metronome sweeps back and forth above the river. It’s been there for about 10 years and was erected on the spot once occupied (pun intended) by a huge statue of Stalin that got torn down in the early 1960s. The metronome seems a brilliant symbol of Prague, the real and adopted home to so many great composers over recent centuries as well as being a symbol that biding one’s time  brings success – witness the Velvet Revolution. 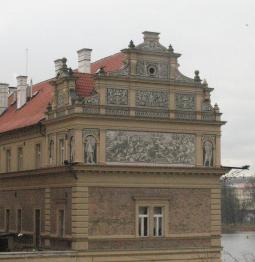