I flew to Dubrovnik, Croatia the day before the packaged tour I signed up for began. My express goal was to visit Mostar in Bosnia. There are day trips by bus from Dubrovnik most days. When you look at a map, you see that Croatia is actually divided in two, separated by about 15 miles of coastal Bosnia, which is where the excursion leaves the main coastal road and heads inland towards Mostar. Before you come to Mostar, though, there are a couple of stops to make.

There’s only one Bosnian town along the Adriatic – Neum. It has a dozen or so large seaside hotels, some restaurants, a bunch of smaller places to stay and, like most of small town Europe, many private homes offering accommodation.

view of the Adriatic and Elephati Islands from Neum

According to Wikipedia, Neum has a population approaching 5000. The most active spot in the town seems to be a  mandatory rest stop for tour buses. How the drivers of these motorcoach behemoths manage to wedge their vehicles into the shallow parking lot without bouncing off one another or ripping off their floppy bunny-ear side-view mirrors is a marvel. Most Dunkin’ Donuts shops have bigger parking lots than this! One or two guys are always on hand to signal the drivers just how many (or how few) inches there are between their bus’s bumper and the next guys’.

You recall I said mandatory rest stop? I’d be willing to bet this tour bus pit-stop pulls in as much money on any given day as some of the hotels. I visited it three times in the space of two days. Two of these were on this excursion between Dubrovnik and Mostar; the third time was on the Dalmatian Sunshine tour as we left Dubrovnik and headed north towards Split and other destinations to the north. I know, I know, distressingly touristy but they’ve got to start somewhere. In addition to a small cafe with its much-appreciated toilets, there was an ice cream vendor, a coffee bar across the highway (pretty safe to cross this main highway, since all the tour buses were either entering or leaving the parking lot, not screaming down the road) and a small market underneath the cafe. The market had all the usual souvenir tchotchkes as well as packaged snacks, fresh and dried fruits, breads, cheeses and salamis, bottled water, juices, soda and beer in the cooler and bottles of wine. Bus drivers loaded cases of bottled water into cargo areas to sell to passengers later on for 1 euro per bottle. No opportunity goes unexploited.

On the way to Mostar, the bus stopped at the tiny Muslim village of Počitelj.

Wikipedia says the village has 900 inhabitants, but there were so few buildings visible from the roadside, it seemed to have far fewer than that. Like almost everywhere else I went on in this trip, streets and paths were painfully cobbled and steep. No health club needed here; just walking uphill the fifty yards or so to the mosque gives you all the cardio workout you could possibly need.

Villagers were selling fresh and dried fruits and colorful knick-knacks which may or may not have been locally made. In a large courtyard near the road stood a large specimen of my favorite tree in the world, an albrizia, (aka mimosa). 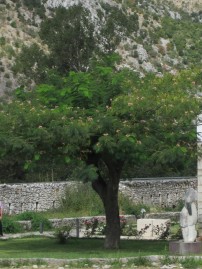 Its signature puffy, pink-and-white  blossoms popped up among a dense canopy of feathery leaves that hid the delicate branches, leaves that fold up at night or during a rainstorm. What a nice surprise.

I probably should have bought some fruit, too, but I was all too aware of my much-less-than-adequate budget for this trip and also felt that the first day of the trip was not the time to be testing the lining of my stomach with the local produce. Hindsight is 20-20 (I never had any problems) but this part of Europe is arguably the most exotic place I’ve ever visited. It could have turned out differently.

view of Neretva river from Počitelj

The visit here only lasted about 15 or 20 minutes. Next stop – Mostar.