Italy sounds like the most romantic destination. The name conjures images of wine and cheese, pastoral sunsets, pizza and pasta, cypress-dotted countryside and Renaissance art and architecture, not to mention movies and movie stars that glam up the image. You’d think I’d have checked out the fairy tale by now, wouldn’t you? In more than twenty years of traveling to Europe, I’d never set foot in the country but this spring I finally got a taste with two nights in Venice.

To be honest, Venice “won the toss” simply because I was trying to get to and from the Croatia’s Istrian peninsula without having to fly back and forth to London Gatwick for connections. Venice resolved the issue and I’m glad it did.

Venice featured in the plan because there’s a ferry from there to Istria and that sounded exciting. In the end, the ferry was cancelled, replaced with an overland bus. My hotel in Rovinj, Croatia, was already booked, so taking the bus was the only way to go. My adventures in Rovinj will be the subject of some future posts. What was I saying? Oh yes, Venice.

Given that I only stayed for two non-consecutive nights, I spent an inordinate amount of time researching where to stay, how to get to and from the airport on the mainland and how to get around the city. I was unsure how physically difficult it would be with none of the usual transportation options. Travel programs and print guides emphasize the lack of street signs and the amount of walking one can expect, water transport notwithstanding. As it turned out, I managed fine in Venice; I just needed to give myself enough time to get where I was going at my own pace, something I plan for anyway. No worries!

Now for the actual logistics. Note – there is a land connection to the bus station, but that still requires a water connection or a very long walk. Nah. Private water taxis are the closest you can get to door-to-door service, but they are expensive – $35 or more for a shared ride. Nnnnno. I opted for the public water bus and it worked out fine.

The Alilaguna water buses connect the airport to the main Venice canal stops cheaply in about half an hour. Get a ticket from the ticket desk in the arrivals hall (different color-coded lines make different stops; I was directed to the blue line for San Marco Giardinetti), then trudge the few hundred yards out to the water bus docks. Getting on the boat was a little bit tricky. When the boats pull in, they smack hard against the small floating dock – my luggage and I got unexpectedly chummy with other passengers nearby on that first thwack! There’s no wasted time getting on. Tell the ticket puncher which stop you’re going to so he can pile the luggage for the first stops closest to the ramp. Then head below deck, sit down and ride the waves to Venice.

Tripods of wooden pilings mark out a channel like a highway. There’s not much romance to this watery transfer; your head is slightly below the bottom of the scratched up windows which are barely above water level. 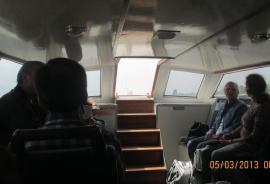 Inside, the ambiance really did feel like a city bus – not much chitchat and locals don’t bother to look out the windows. We tourists, of course, snap pictures of all sorts of nothingness going by. Every time we got slammed by a wave from the speed-demon water taxis, I expected we’d be swamped but we stayed dry and the water bus stayed afloat, putt-putting its way along the channel.

watch out for the water taxi!!

We stopped at the glass-blowing island of Murano and passed the cemetery at San Michele. A few minutes later, we were on the Grand Canal. 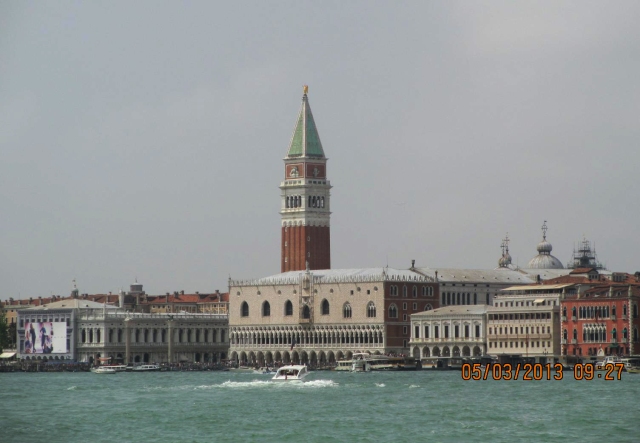 The water calms down away from the open water. Boats have to slow down either to squeeze past one another (much of the Grand Canal is less than 200 feet wide) or to queue up at the various stops to discharge and take up passengers.

It’s always a good idea to study the maps on public transportation; the line diagram near the doorway told me which stop (San Zaccaria) preceded the one I wanted (San Marco). No surprise, almost everyone else was getting off at San Marco, too.

Then there are the bridges. Except for the cheap cross-canal traghetto gondola spots on the Grand Canal, the only other way to cross a canal, even a tiny one, is by footbridge. When you’ve got luggage, this can be a pain, not least because the bridges are steep; wheeled luggage is helpful, if noisy (thunk-thunk-thunk-thunk). My hotel choices were made as much by counting bridges from the canal stop as by price or other criterion. I managed to keep it to just one or two but obviously, when crossing canals with bag/s in tow, the lower the bridge count, the better. Another note – some of the larger bridges have ramps near the railings to make luggage-schlepping easier but most of the small ones have no such feature. 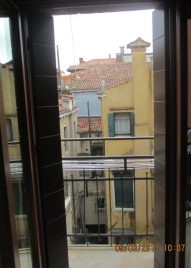 my room’s view at Hotel Mercurio

Hotels with elevators are always nice but the places I stayed didn’t have them. I assume you need to stay at one of the big, fancy places if you want an elevator. At least with small hotels there are not too many flights and at one place the desk clerk took my bag up to my room for me.

My total time in Venice was barely 48 hours but I still had time to explore some of the streets and alleys around San Marco and Rialto. 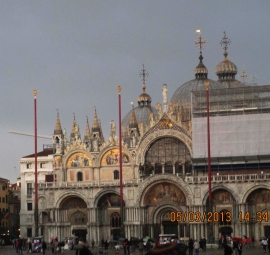 The piazza and basilica of San Marco were crowded, but nowhere near as much as they are when the cruise season is in full swing. The queue to get into the basilica moved quickly, a good thing because I wasn’t overly awed by the interior. Maybe I’d just seen it on TV too many times or perhaps the reality fell a bit short of the bright, high-contrast postcard pictures at the gift shop. Even with the noontime sun on the day I visited, the frescoes and gilt seemed dull, even shabby. (I think I know why this was, but you’ll have to wait for my blog post about the Sagrada Familia in Barcelona to find out).

When I went for a stroll each evening, I saw that the daytime crowds that had clogged the area around Rialto Bridge 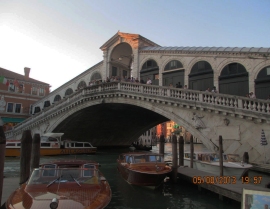 had gone back to their cruise ship/s for dinner, leaving a quieter, more intimate and much more enjoyable city.

My second night was also spent at Hotel Centauro in the San Marco section of the city, only a couple of streets away from the first place, but closer to Rialto than to San Marco. Not much of a view, but with obviously Italian decor.

my room at Hotel Centauro

I didn’t eat much in Venice, so I don’t have any restau recommendations. The first day, I had some leftover snacks in my backpack and topped it off with a gelato near St Marks Square. The second time, I did the snack thing for lunch and went searching for some pizza for dinner.

I wound up at a Vivaldi concert at the Palazzo delle Prigioni (Prisoners Palace) near the Bridge of Sighs.  Surprisingly, the concert was pretty uneven; some of the musicians did a superb job but one of them was dreadfully uneven. It was hard to tell whether that particular fiddler was drunk or an ill-advised substitute, sloppy in technique or tuning or if he just didn’t care because we were a bunch of tourists. Another time, some research or a recommendation might lead to a better choice. Terrific setting, though and there are other musical choices at this venue and others all over the city. Maybe opera at La Fenice next visit? 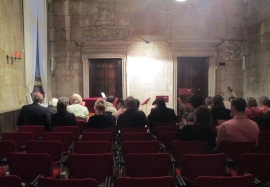 Waiting for the airport-bound water bus early on the second morning, I became fascinated by the crush of trade on the Grand Canal. Where other cities would be filled with trucks, cars and vans bringing goods to various businesses, Venice was getting her deliveries by boat or gondola to the canalside stops and the stuff continued from there by handtruck. (Here’s a short video from YouTube).

Now that Italy is on my radar, it’s worming its way onto lists for future trip/s. In the meantime, I’m rereading Donna Leon‘s Commissario Guido Brunetti mysteries, set in Venice; having experienced La Serenissima for real, the locations and moods described in her Commissario Brunetti stories are much more enjoyable.

Venice is definitely a city of romantic decay and elegant decline. Focus on the adjectives and you’ll fall under her spell. You should go!

2 Responses to First impressions of Venice