Celebrating Queen’s/King’s Day/Night in the Netherlands

In 2013, the annual celebration of Queen Beatrix’s birthday at the end of April became a joint Queen’s/King’s Day all over the Netherlands. It was to be the last Queen’s Day (Koninginnedag) and the first of many King’s Days (Koningsdag), since the queen’s son was replacing his mother on the Dutch throne the following day. From 2014 on, it becomes King’s Day and the official date moves from 30 April to 27 April.

Beginning at 6pm the night before this national holiday, the Dutch people hold a nationwide tag sale, beginning at 6pm. This free market (vrijmarkt), is the only time of the year when anyone can sell stuff in public without getting a permit and folks definitely take advantage. I was staying at a house in Alkmaar, a town near Amsterdam last year, when I went to the Netherlands to look in on this once-in-a-lifetime dual birthday bash. The house was a on a side lane off the main shopping street and a good ten minute walk to the train station, so I had a chance to check out the first setups as I headed off to catch a train to Amsterdam for some sightseeing. 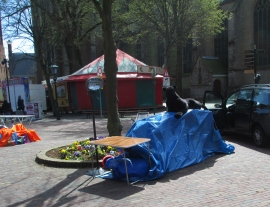 staking out a spot for Queens/Kings Night vrijmarkt, Alkmaar, Netherlands

As is the case with any special event, people staked out the best location for the big day early. Tables and blankets filled with all sorts of stuff from attics and basements were set up practically at sunrise, owners keeping watch, probably more to guard the spot than because of any worry over thieves.

By 6pm, not only were the covers off and the crowds out and about, but booths were open for business selling stroopwafels and other sweet snacks, mass-produced souvenirs and even a few midway games. Orange is the overwhelming color for hats, scarves and other clothing because the Dutch royal family is known as the House of Orange. Streamers and balloons, almost anything that was orange decorated buildings, canalside railings, street lamps – you get the idea. A fun family evening for sure. 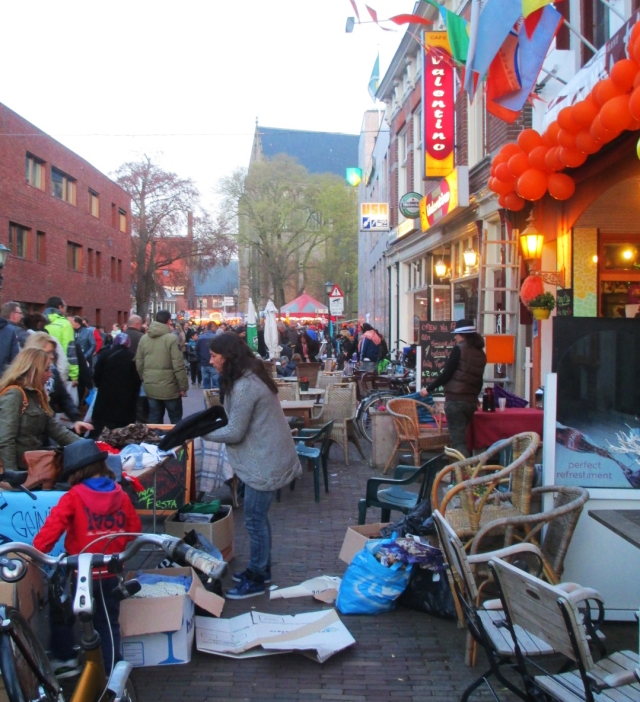 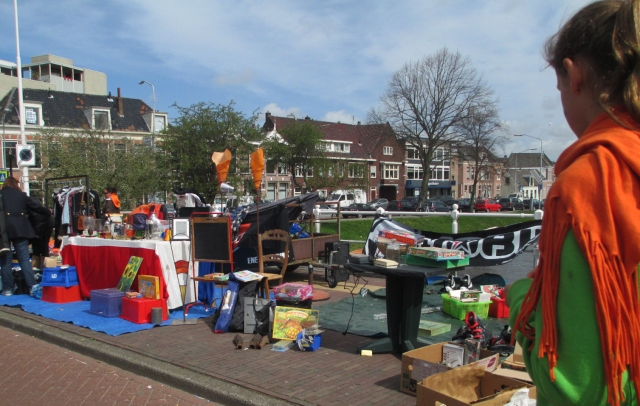 The sprawling anything-for-sale flea market was in evidence in Amsterdam on the day itself but, mixed in with all the rest of the event hoopla, it felt only marginally less wild. Orange hats, wigs, inflatable orange crowns, more balloons, little flags handed out to wave 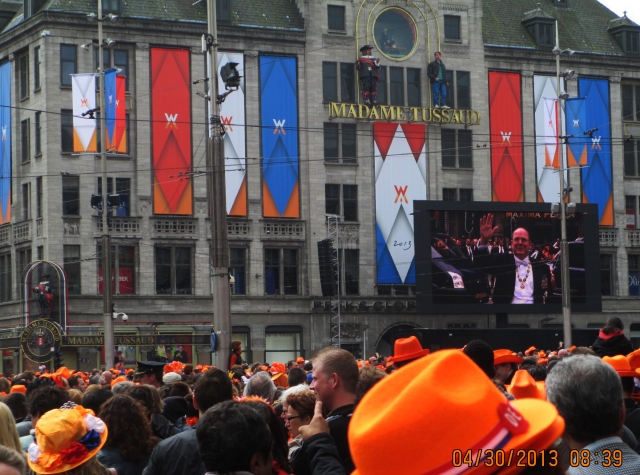 when we got to Dam Square, where jumbotrons displayed the procession of dignitaries and miscellaneous royals. The crowd was so huge and dense, there was no other way to have any idea what was going on. Mind you, I’m not up on my European royalty, so, except for Queen Beatrix herself, I had no clue who was being shown.

I’ve read that the police are stood down on this day but, having said that, there didn’t seem to be anything happening to require their attention beyond giving directions or posing for photos. 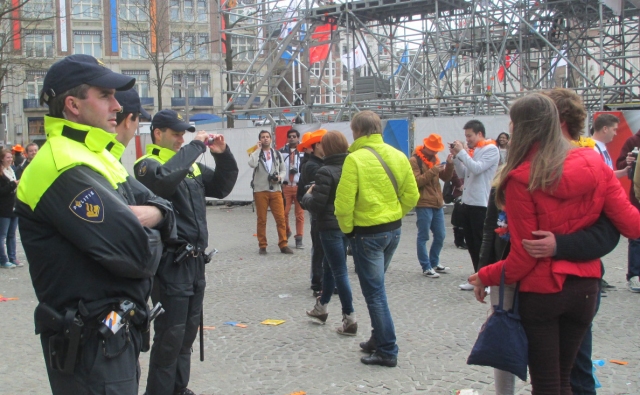 The street cleaners had their work cut out for them in the aftermath, despite the fact that trash barrels were crammed to overflowing with rubbish. 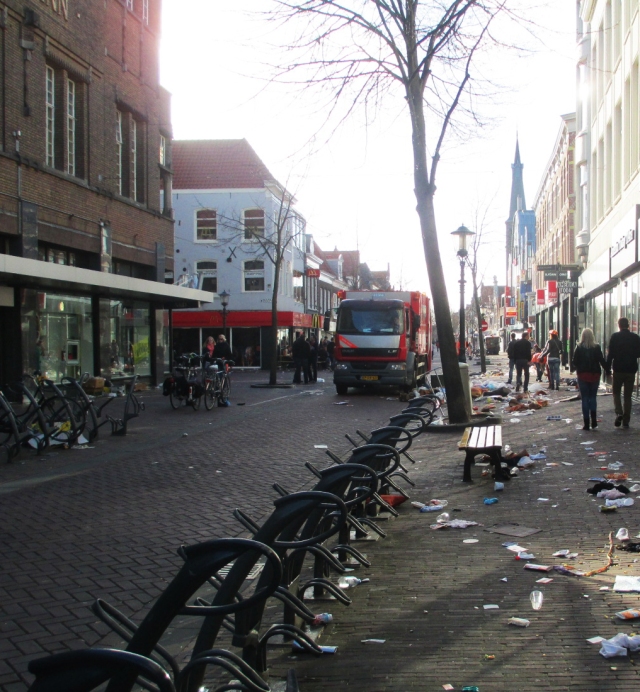 Rubbishy aftermath of the celebrations

The souvenirs I brought home from the day are in another blog post. My big purchase in Alkmaar on King’s Night? A pair of tiny orange knit caps with red, white and blue detailing. I assumed these were probably doll’s clothes, but I bought them for my dashboard rats. Side note – I don’t remember how the rats got started; they’re from IKEA and they began life perched on top of my cubicle wall at the office. Now that I’m retired and with no intention of ever getting stuck in a cube farm again, the rats moved (logically?) to the dashboard of my car. Their attire, usually cobbled together from craft store scraps, changes with the seasons and the holidays. Nothing too fancy. After all, they’re just cuddly toy RATS, for cryin’ out loud. Still, they looked quite charming in their orange ski caps this past winter. Hooray for the House of Orange! 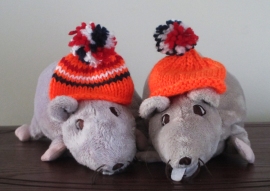