A wee dram and a tour of Highland Park, Orkney

Several years ago, I got a very useful introduction to single malt Scotch from the landlord at the Ensign Ewart pub, just down the hill from Edinburgh Castle. One of the malts I tried – and liked a lot – was Highland Park. What I didn’t know until shortly before my recent trip to Orkney was that Highland Park Distillery is located in Kirkwall, the largest town in Orkney, about a mile uphill from the main drag. I had to squeeze in a visit.

After a second day visiting the Neolithic sites Orkney is famous for (posts to come), I booked the last tour of the day at the distillery. See? Having a UK (pay-as-you-go) mobile phone comes in really, really handy for making such arrangements without breaking the bank. It also helps if you don’t leave it in the cab (post to follow).

Highland Park is one of only a handful of whisky distilleries that still floor-malt the barley (soak in water to germinate) and spread it to dry by shoveling it. They are also one of two distilleries in Orkney, the other being Scapa, only half a mile away. This first step wakes up the enzymes which turn the starch into sugars. 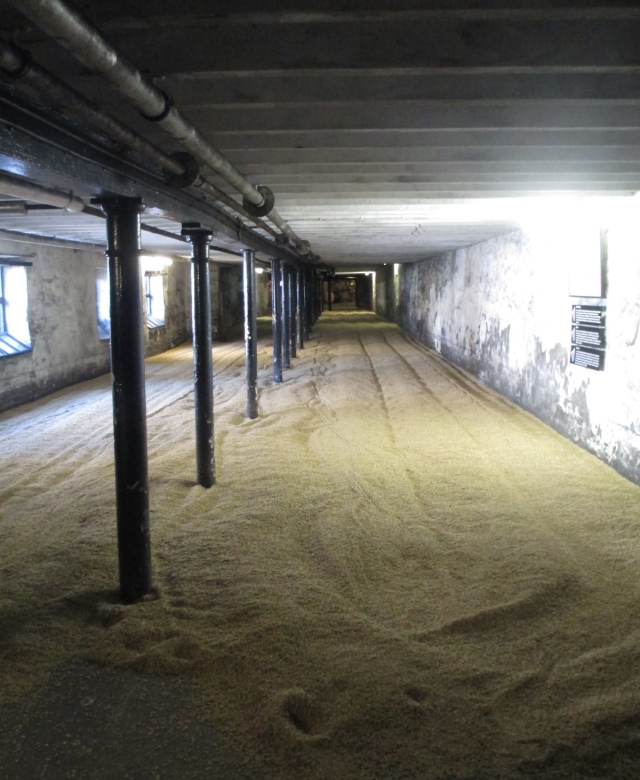 Germination is stopped and the grain dried out further in peat-fueled kilns. Remembering a news item that highlighted the disappearance of peat bogs in Ireland where it is a common home fireplace fuel (you can buy packs of peat bricks there the way we buy a small bundle of firewood in the US), I asked where the peat came from and how much they used. The answer – they use heather-peat from their own land. They need 200 tons of peat per year and they estimate their supply will last for 300 years. Guess I don’t need to worry they’ll run out in MY lifetime!

Next, the process moves to the mash house where the grain is mixed with spring water, poured into mash tuns – some old wooden ones, other tuns are stainless steel – to develop even more sugar. A motorized rake rotates inside the tun to keep the mash and wort from scorching and keeps the temperature uniform.

We were allowed to take photos of everything to this point but then we came to the building that housed the huge copper stills. This is where the alcohol gets developed – and boy, you could smell it, even feel it tickling your eyes and nose. We were allowed to take photos from outside the door and allowed to step into the still room, but NO photos once inside. The fear is that the tiniest spark would blow up the whole thing, taking most of Kirkwall with it. Yes ma’am!

After the liquid goes through multiple washback (recycling, evaporating and recondensing) cycles in the stills to raise the alcohol level, it’s time to put the stuff into oak casks for their minimum three year nap. By law, however, Scotch labeled 12 year old or other must have whisky no younger than that. This barrel-aging is where the angels get their share through evaporation – I imagine these are some pretty damn happy angels! Cask aging is also where the whisky gets its color. Side note – Highland Park is one of the Scotches that goes into Famous Grouse, though I sort of assume the stuff leaves home as soon as it reaches three.

Aside from the amount of time the malts spends in cask or the number of washback cycles, the difference in taste comes from which oak is used for casking. Highland Park uses both American and Spanish oak for their barrels. We were able to take deep breaths of each. The American oak had a more delicate, almost vanilla aroma; the Spanish barrels had a much stronger, grapy even fruity smell. The amount of time any whisky spends in each or either determines the individual character of each end product. The Spanish barrels are used to age oloroso sherry for several years before they come to Kirkwall. Don’t remember if the American oak came ‘pre-seasoned’ or not. I found it interesting that the barrels are coded and bar-coded so that the casual thief can’t tell which Scotch is more valuable to boost.

FINALLY! A tasting in the gift shop (never let it be said the Scots don’t know how to wring every possible pound from their guests). I plumped for the three whisky flight. All in all, a superb end to a day on Orkney. We got to keep our cute little dram glass, a nice memento and just the right size for my luggage.

a proper wee dram to end the tour

Highland Park produces the standard aged whiskys (12, 15, 18 year old) as well as a number of ultra-cher bottlings, named after Norse gods and others named for famous Vikings. Many of these were available at airport duty-free but I wasn’t in a position to buy any of these. Too costly and bulky. I’m not sure what availability might be here in the USA.