Over the years, I have visited Oxford, England a few times. The first two times were back in the early 1990s. Both times, I took the ‘official’ walking tour of the colleges, conducted by vetted Blue Badge guides. These guides provided interesting history and were fun to listen to. My most recent trip was last winter. The weather in the northeastern U.S. was snowy and cold (and snowy and cold and snowy and cold). I like snow and I like cold, but last winter was too much of both. England had also experienced a snowier than average winter, but they only had to deal with a couple of weeks of near-freezing temps and around 6 or 7 whole inches of snow at a time. In mid-January, after rescheduling my trip following a huge blizzard at home, the weather  in London was mostly sunny, with temps in the 40s  and not a single snowflake in sight!

Because I almost always include a few days in London when I travel to Europe, I wanted to go somewhere beyond that city this time. I chose Oxford because it’s a place I’d always enjoyed and I hadn’t been there in a long time and, as I watched Inspector Lewis episodes on PBS, I felt almost homesick having not seen the place for more than ten years.

I noticed changes as soon as I arrived. The rail station has been refurbished and now I have to feed my train ticket into a card reader in order to leave the platform and enter the station. The walk into the city center took me past the new (1996) business school. When I was last in Oxford, the Tourist Information office was on St Aldate’s, across from Christ Church College. These days, it’s in nicer digs on Broad Street, opposite Trinity College.

Tourist Info was my first stop because I wanted to take another walking tour. Nowadays, there are more types of tours than just seeing the Oxford colleges but there were fewer times available because it was winter. One of the most popular is the Inspector Morse tour. All the tours for the day, including the Morse tour, were already booked, so I contented myself with buying the guidebook for the Inspector Morse/Lewis series locations and went out into the cold sunshine.

As it turned out, luck was with me. A dapper looking fellow named Stuart stood across the street, near the Trinity College gates, encouraging visitors to sign up for his University walking tour including ”warm chapels and dining halls”. Since I didn’t really fancy my other option, shuffling around the museums – though I will do that one of these days – I bought a ticket and waited for the tour to start. Some of the sites were the same as I’d visited 20 years ago but as an Oxford graduate, Stuart brought a mischievous humor to the narrative, laced with insider tidbits.

We saw locations from the Inspector Morse (Morse has his heart attack in Exeter College quad) and Lewis (the outdoor café on the pedestrianized Broad, within sight of the new tourist office) TV shows that were made after 1993. 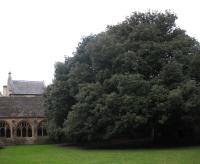 New College cloister where Malfoy is turned into a weasel

Locations from the Harry Potter films added a new dimension to Oxford University’s attractions and there were some pop quiz questions that tested our knowledge of the Potter stories.

Afterwards, I detoured through the Covered Market, another spot that seemed rejuvenated and did a little shopping along the Cornmarket as I made my way back to the rail station.

One of my favorite take-away food places in Britain is a chain called Upper Crust. They specialize in a dozen or more varieties of ready-made baguette sandwiches – toasting optional – and these shops are conveniently located at the larger rail stations. Oxford station was no exception and I picked up a toasted chicken baguette and a bottle of spring water for the one hour train ride back to London.

All in all, a relaxed, undemanding visit. Getting reacquainted with Oxford was a great way to spend this day out from London and made me promise to myself that I wouldn’t wait so long before coming again.

This entry was posted in All Suzanne's travels, England and tagged oxford travel, UK travel. Bookmark the permalink.