London nights at the opera – outdoors and in

When I was in college, I got completely hooked on live theatre. My mother, on the other hand, had been thoroughly captivated by the ballet for decades. Classical orchestral music was a minor interest but usually in the form of recordings or radio programs, rather than live performance. For whatever reason, opera was not on my family’s radar.

My opera conversion came,  unexpectedly, 7 or 8 years ago. It started when a friend offered me her spare opera ticket and I accepted, curious to see and hear what got opera buffs so excited. That evening in Minneapolis was a double bill: Pagliacci, which was interesting, if not especially energetic. This was followed by Carmina Burana, an absolutely stunning choral work. I can’t imagine anyone hearing Carmina Burana or seeing it in performance and NOT being drawn to opera. It’s what sealed the deal for me.

Then, a couple of years ago, I enjoyed a terrific Carmen at the Metropolitan Opera in NYC so when I was in London last summer and found the city uncharacteristically short of plays that I had to see, the box office at the Royal Opera House at Covent Garden was a logical second choice. It was a Tuesday and I came away with a ticket for La Traviata for the following evening, since there were no tickets available for any of that week’s Simon Boccanegra  performances with Placido Domingo – no real surprise.

That’s OK, I thought; I was looking for a ticket on the spur of the moment and there are times when scoring even one measly ticket is impossible. On Tuesday evening I was meeting a friend for drinks at a pub on the Strand which meant walking through Trafalgar Square. Trafalgar Square is always buzzing, especially when the weather’s nice. The National Gallery and St. Martin-in-the-Fields church overlook the Square, attracting locals and visitors alike and the Leicester Square area of the West End is barely a hundred yards  up the hill behind the Gallery. The area is often the location point for political rallies (there are several embassies nearby) and there are usually tons of tourists enjoying the fountains and clambering all over the huge black lions ringing Nelson’s column. All this combines for a great meeting-up and chill-out space in its own right, although the mood may change if or when the lions are declared off-limits to climbing – they are gradually being worn down and some lions are in danger of collapse – a story for another time.

Sooo… I wasn’t surprised to see that Trafalgar Square was packed as I headed for the Strand and my pub and dinner date. I was, however, intrigued by a giant TV screen and sound system in place near the lions. It turned out that all this was being set up for the live, free, closed-circuit broadcast of the Royal Opera that evening – one of the sold out performances with Placido Domingo. As Phil Rizzuto used to say – ”Holy cow!”

After dinner, I raced back to the Square and settled in to watch the Opera or what remained of it – I think I missed the first hour. It started to drizzle shortly before the  intermission, just enough to cool the air and make the pavement slippery. Besides, I was having too much fun to let a little rain force me away from what seemed a pretty big cultural deal even for London, judging by the size and rapt interest of the crowd, most of whom stood for the entire performance (there were some roped-off areas with folding chairs, but these might not have been free; people seemed to have tickets allowing them into these areas).

The following night was La Traviata, indoors at the Royal Opera House, Covent Garden. This space had been renovated several years ago and it was spectacular. I don’t know what the old opera house interiors looked like, since this was my first visit.

The house interior was gorgeous but I didn’t see anything especially unique there – that sounds jaded – but I suppose I just expect opera houses to be opulent. The restaurants and bars, on the other hand, were magical. In particular is the Paul Hamlyn Hall which serves the stalls (orchestra seats) and Grand Tier and its Perrier Jouet Champagne bar. The bar occupies the center of the room under an openwork art nouveau canopy reminiscent of the oldest Paris metro  entrances, very much in keeping with Perrier Jouet’s graphics. The most amazing feature of this room was the fully mirrored wall opposite the huge windows. There is an upstairs bar, which serves the upper circles, and overlooks the Hamlyn Hall room. The wall of this upper room is also faced in mirrors. The startling visual effect is that the upper bar appears to be a very shallow, glass-enclosed elevator that has stopped part way to the ceiling, floating above me. I stared at this optical illusion for most of the intermission, trying to work out whether it was actually a motorized room or not. I found out later that it was just the upper bar, with a narrow overhang, but the illusion stays, even knowing the truth behind the magic. 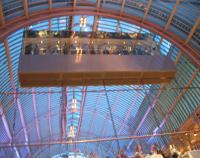 I had taken advantage of that most civilized of London theatre services – ordering your intermission drink before you  take your seat. You order, pay, get a numbered chit in return and the bartender tells you where to find your drink, whether it will be at a particular table, along a railing against the wall or on a section of the bar. Your drink and a matching chit will help you identify which of the glasses has your refreshment. Simple, and with the obvious advantage of avoiding the scrum at the bar wasting precious time!

I returned to my seat, next to a nicely dressed elderly woman who asked how I was enjoying the opera. We chatted for several minutes about how long each of us had been following opera, the exceptional quality of the voices (no Placido Domingo in this production but outstanding nonetheless). The man seated on her other side – these folks did not know each other – leaned over and mentioned some of the places he’d visited in the U.S. There’s nothing like an American accent to get a Brit to open up! All in all, this was a memorable addition to my list of opera experiences and has added a new dimension to the great times I always have in London.

Except for the really big names, like Placido Domingo, I’m still new enough to opera that I don’t know the names of specific singers well enough to seek them out but that’s more a function of not regularly attending productions by a particular company than of not being impressed by a particular performer’s abilities. So far, I’ve been blown away by at least one singer at every opera I’ve attended.

This entry was posted in All Suzanne's travels, England and tagged london travel, opera in europe, UK travel. Bookmark the permalink.

4 Responses to London nights at the opera – outdoors and in