Coping with the heat in northern Europe

Posted on September 1, 2011 by suzykewct

Last July was a scorcher throughout most of Europe. Even in Finland, temps were setting new records; I was in Helsinki in mid-July when they set a new record (89) and they saw a nother new high of 93 before the month was out. Hot, hot ,hot – unless you hung out near the harbor or even better, took a boat ride to Suomenlinna or the Zoo or just a loop around the harbor and islands. 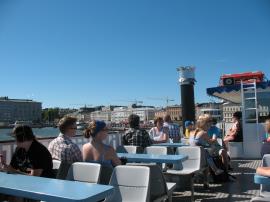 It's cooler on the water in Helsinki

I usually travel in spring or fall, so a lack of air-conditioning in the budget places where I stay is rarely an issue. Nights in Helsinki were cooler than those I spent on the Continent but open windows and an electric fan, even there, did not make the room air cool enough and breezes, if any, were faint. I’m not a hot weather person to begin with, so when the temperature rises above 75 degrees, crabbiness is an easy mood to slide into. I don’t bring that mood with me when I travel, but the heat on this trip was a trial.

I will have other stories about my time in Helsinki, Brussels, Luxembourg and London. This is just a story about the heat and the things I focused on in an attempt to ignore the heat, if not resolving NOT to travel in midsummer again. Mind you, summer in Europe has a volume and variety of cultural activities, especially outdoors, that you just can’t find in the other seasons.

In Brussels, Luxembourg and France, temperatures were routinely in the low 90s, but at least my rental car had a/c, so the days were bearable as long as I was driving. 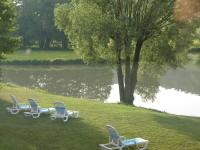 The misty pond at La Mezelle

A three day driving loop began in Brussels and went south through Luxembourg into eastern France on the first day. I headed for Dijon, thinking I could catch the Tour de France but I had forgotten just how large France is, so my first night was at an isolated family resort called La Mezelle, about 50 miles north of Dijon.

La Mezelle is located in the middle of nowhere, the only building visible in any direction. I found it only because it was getting near dusk and I took a chance that following signs to a casino would lead me to a hotel. It didn’t, and I’m still puzzled about who would seek out such an apparently hard-to-find casino. Aah, but what do I know? About five miles beyond the casino, I came to La Mezelle, nestled in a bucolic area of misty meadows and clusters of trees. A large pond lay behind the three-story chalet and cows grazed lazily along the fence across the road. I had great hopes of a cool night but it didn’t work out at all – I had to keep the window closed because of the armada of hungry mosquitoes who wanted to come in and snack on me. So much for the countryside!

The second day was another reminder of how huge France is. I’ve decided that France is basically a half-dozen large cities surrounded by miles and miles and MILES of farmland. No wonder France’s farmers wield so much power. I spent most of the day trying to regain my bearings. I used my horrid French at a gas station on the edge of a tiny village to get the tank filled (driving through beautiful scenery does use up gas!) and fought the urge to drive to Dijon just to say that I’d made it there. If I had done, though, I might well have missed my train connection in Brussels in two days’ time.

In the end, I headed back north to the Champagne region just in time to join rush-hour in Reims, a larger and more commercial-looking place than I expected. Since I had no accommodation lined up on this night either, and seeing neither hotels nor any sign of Tourist Information and deciding against pulling into a public garage just to walk around aimlessly, even if I could have visited Reims  Cathedral – it loomed over me as I sat at a traffic light. Instead, I changed plans again and headed for Epernay (it pays to read champagne labels!) about 15 miles away.

This night turned out to be the first of only two nights on the entire two week trip spent in an air-conditioned room. It was just dumb luck that I chose the motor inn on the traffic circle at the edge of Epernay. It was late in the day when I arrived in town and I wanted to find a place to stay before it got dark. I opened the door to the room and found myself in a  windowed vestibule, like a phone booth, separating the entry from the rest of the room. 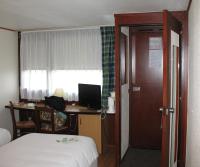 how to keep cool air inside a room

When I opened the inner door, I immediately understood the reason for the layout. Cool, dry air and the comforting hum of an air-conditioner!! I plopped onto the bed, turned to the soccer on TV and read through my brochures on Epernay as I simultaneously worked my way through the snacks that served as dinner. This was a Saturday night, so I made notes on all the champagne houses that were open on Sunday. Some were only open by appointment, others were open but English-language tours had to be booked in advance and a few had English-language tours on Sunday without pre-booking. I found these on the map and figured I’d stop at the first one I could locate. The next morning, after breakfast on a small section of the patio that was NOT under construction, I checked out and headed for town. I pulled into the parking lot of Champagne des Castellane, the easiest place in Epernay to find because of its tall, distinctive tower (click on the link for pictures; mine were kinda crummy, and blurry – and that was BEFORE I had the glass of champagne!!) The other advantage of being in a wine cellar, of course, is that it’s at least 20 degrees cooler than the street on the kind of hot day I experienced that Sunday. Too bad they were closing for lunch just as I finished the tour; I was considering a “do-over” to avoid going back out to the heat.

This lovely break was followed by the irritation of getting lost between Champagne and Luxembourg City. The fact that I stumbled across the Duval brewery in the process was a discovery I normally would have checked out, but I was trying to get back to Luxembourg to visit Patton’s grave at the American cemetery before they closed for the day and this was my only opportunity, having been unable to find the cemetery when I headed south from  Brussels the day before. I’ll write about my visit to the American Military Cemetery in Luxembourg City in another blog.

This was the last day before I had to return the car and I drove back to Brussels so I could return the car where I picked it up – Bruxelles Midi – the rail station on the south side of the city for Eurostar, the high-speed train to London. My first thought was to park in the garage in the rental company area and find a hotel nearby. I know there are at least two, but maybe I was looking for bigger signs. For whatever reason, I saw none. OK, back in the car and cruise the highway that forms a ring around Brussels. It wasn’t until I got near the airport north of the city that I found any hotels. Here again, I got lucky. Air conditioning!

The hotel, a Crowne Plaza, was more upscale than I usually use: king-sized bed, gorgeous bathroom, mirrored mini-bar with just enough room for my leftover sandwich, wine and o.j. 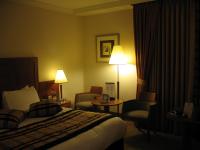 In the morning, I ate my leftovers for breakfast, rather than pay the 15 euros the hotel wanted; bad enough blowing the budget on the room. I do allow myself to go off-budget, but I try to limit the damage, especially for silly stuff like a hotel room; better to save it for the good stuff, like books. And wine. And London theatre.

The (cool) Eurostar lounge area has its own snack shop and bar. There is also a very upscale chocolate shop – this is Belgium, after all. As a non-EU passport holder, I had to check in with customs and fill out the usual form. Note to self for the future – carrying wine onto Eurostar is OK; they won’t confiscate it (I keep forgetting how civilized Europe can be).

In London, the temps were much less oppresive and the open window and electric fan DID cool the room overnight. Still, locals, humans and fowl alike, sought ways to keep cool. 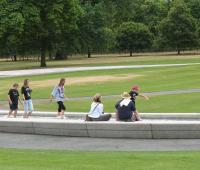 Cooling off at the Diana Fountain, London

Still, locals seemed to wish it was cooler, humans and fowl alike.

This entry was posted in All Suzanne's travels, General magpie travel and tagged france travel. Bookmark the permalink.

1 Response to Coping with the heat in northern Europe