Posted on September 5, 2011 by suzykewct

Several years ago, I spent an afternoon in Luxembourg City. After walking along the bluff that leads uphill from the train station (the long, steep drop

a bridge over the Alzette area in Luxembourg City

down to the Alzette (I think) riverbed is amazing… I mean  bungee-jumping amazing in places and the photos I took do not do it justice), I had just enough time to take the city bus tour before catching the train back to Brussels. Unfortunately, the bus route did not include the American Military Cemetery; I was told the cemetery was too far out-of-town. I resolved to go back and visit the cemetery at my next opportunity and had to content myself with a bus tour around the city and a glimpse of the building that once served as Patton’s headquarters in Luxembourg. 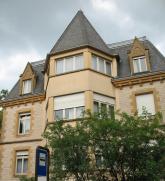 Last summer, I finally made it to the American Military Cemetery in Hamm, Luxembourg at the end of a short driving tour that took me from Brussels, Belgium through Burgundy and Champagne in northeastern France and back to Brussels via Luxembourg City (see my recent blog on ‘Coping with the heat in northern Europe). 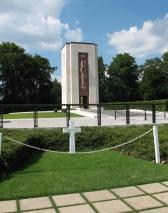 This cemetery is where General George Patton is buried, the reason I had it on my list. Originally, Patton’s grave was just another of the almost uncountable graves, with no particular pride of place. In March of 1947, his grave was relocated to a spot at the top of the cemetery, the first grave you come to after passing through the gates. Patton’s headstone, set off with a low chain, faces the other graves, as though addressing the troops he so loved. Most of the soldiers buried here were killed during the Battle of the Bulge in the winter of 1944-45. Patton himself, however, died from complications following a motorcycle accident in California in December of 1945. 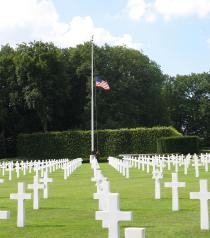 lowering the flag at the end of the day

Taps was played (not by a live bugler, but as a recording over the loudspeaker, alas) as the two flags flanking the cemetery entrance were lowered in turn just before the site closed for the day. I’d made it just in time. It must have been hot, even late in the afternoon, as it had been for most of the previous week, but I didn’t notice. Military cemeteries, especially American ones outside the U.S., are humbling,  heart-breaking places. Even the ones from World War I, filled with the  dead from a war whose survivors have all left this earth, are sad. They remind me that war has been around since the beginning of human time and, horribly, disgustingly, will likely always be with us.  We honor our war dead in the U.S. a few times a year, although less loudly on November 11th, an international veterans’ day marking the end of World War I and originally known as Armistice Day. I strongly urge readers to seek out military cemeteries when you travel. Maybe, if everyone realized how costly – in all sorts of ways – wars ultimately are, we could stop having them quite so often. Unlikely, perhaps, but we have to start somewhere.

This entry was posted in All Suzanne's travels, BeNeLux and tagged benelux travel. Bookmark the permalink.