The Higgins Armory Museum, in Worcester, Massachusetts, has been in existence for more than eighty years. It is basically one man’s collection of armor, weapons, clothing, stained glass and banners in a reproduction Gothic setting spread across several floors in a purpose-built structure. There was an audio presentation on the ground floor which I skipped, not knowing how large the collection was or how long it would take to see it all.

The second floor (I know, I know, we count the ground floor as the first floor in the US, unlike other folks) was filled with a number of interactive play areas to introduce children to the world of medieval life. Go up to the next floor where the big-deal objects were located. The largest of these was an imaginative staging of two jousting knights on horseback, about to make contact. The topmost level was a mezzanine with non-European pieces and a view of the medieval exhibits on the floor below. 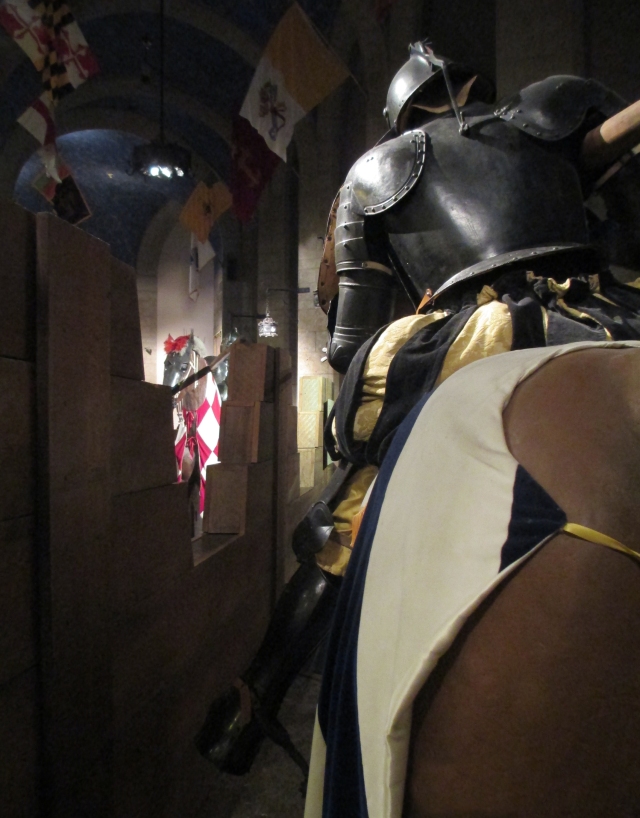 Most displays were traditional, much of it in glass cases. Even having lived in New England for more than forty years (yikes), I didn’t know about the Higgins museum until six or eight years ago. I kept telling myself I needed to visit but it never materialized. This past weekend, I finally went. Sad to say, the reason was the museum’s imminent closing. The last day is tomorrow, New Year’s Eve, 2013.

There were a couple of reasons I wanted to see it. First, I’m a history geek and a Europhile, so arms and armor are a part of that. Second, I have been wondering for decades about the fate and final location of a particular collection of arms and armor I saw years ago. More on that in a little bit.

OK – back to the Higgins collection. The good news is that much of the collection will go to the Worcester Art Museum; a new exhibit will open there in the spring. It’s unclear if pieces sold to private collectors will turn up there on loan. Having only seen the stuff once, I don’t know how much of the collection was on display; catalog numbers indicate thousands of pieces, but I don’t think there were more than perhaps a thousand pieces to be seen. Of course, it depends on how things get counted; a suit of armor, may consist of several acquisitions and catalog numbers, particularly if composite.  I overheard several people in the ticket queue talking about fond memories of visiting the place on school trips when they were younger. I rather think that maintaining the space and the objects, as well as the insurance and security, must have made keeping the museum open unsustainable.

There were items from other time periods and civilizations than just the medieval European stuff; most I gave only the quickest of peeks. I think some pieces would have seemed more impressive had it been arranged in a space more like a rich man’s home, rather than this castle-like space. The few items of, say, samurai battle dress or hoplite knives and helmets would have seemed more remarkable. As it was, they seemed like afterthoughts and got lost in the oversized rooms, but maybe that’s just me. 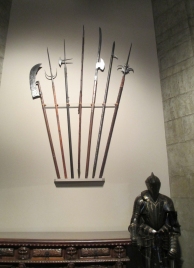 Of course, the museum’s possessions paled compared to the magnificent displays at the Metropolitan Museum of Art in NYC. An unfair comparison, perhaps, but unavoidable; I was surprised to see so few suits of armor at Higgins. Many were composites; the pieces may have belonged to the same place and time period, but did not represent an always-complete unit. The exhibits were a great first-time introduction to this historical period and its fighting traditions; I’m just spoiled by the Met’s collection and by the memory of another museum I visited long ago when I lived in New Hampshire…

There used to be an incredible private collection of medieval weapons and armor outside Laconia, New Hampshire. It was another hidden gem that had been around for a long time when news of its closing provided the most publicity it had seen in its entire existence. I don’t even remember the name of the place. Where the Higgins building is four stories of steel and concrete and painted-out windows, the building in NH was just a giant cube built of concrete block; small windows at the very top of the walls at least provided some natural light to the space inside. Multicolored coats of arms decorated the building along the roof line. The year was 1975-ish. The entrance was locked and instructions were to ring the buzzer and wait. The owners, an elderly European couple, came to the door, let us in the outer set of glass doors, locked them, unlocked the inner doors, let us into the museum itself and locked those doors behind us. There was no one else, so these were our tour guides. The only other fact I recall is that the man had been a concert pianist but had injured his hands while working in NYC loading trucks for Macy’s, putting an end to his performing career. I don’t think there were labels on anything as one might expect in a traditional museum. There were probably two dozen or so complete suits of armor, as well as loads of banners, lances, pikes, horse armor and other medieval weaponry. The couple had also acquired a large collection of French furniture – my French history is dodgy, but the stuff looked like it might have decorated royal rooms and hallways back in the days of the Louis’s. The sad part about that armor collection, aside from the fact that I have no idea what happened to the pieces, was the lack of any brochures or slides (it was a long time ago) or even post cards. I was not likely to have had a camera or, if I did, photos were probably prohibited. I think I remember that the man talked about the huge cost of securing the building; maybe it wasn’t insured or maybe it was. The building was almost invisible from the road except for the upper section poking above the trees and the one sign was small and not particularly inviting. Hard to keep an attraction viable if you feel you must keep it a secret.

Was there really a suit of armor owned by Henry VIII as a young (and slender) man? Or one from some ancient Luxembourg duke? No way to be certain at this point. The owners were trying to find a single home for everything and the rumor at the time was that the Metropolitan had turned them down but that some pieces had gone to a museum in Calgary, Alberta. I went to Calgary in 1986 but the armor there was just a handful of pieces and one mounted figure. The Art Institute of Chicago has a large collection of medieval arms, armor and other objects which I have not yet investigated. The pieces could be anywhere, but apparently they were never part of the Higgins collection.

Oddly – at least I think it’s odd after writing this – I’ve never seen any similar exhibits in all my travels to Europe. I’m sure there are some great ones, not least of which is the Royal Armories in Leeds, England. I can’t really say why the memory of that single long-ago visit to an admittedly amazing array of medieval arms and armor is still so strong nor why the final destination/s is such an enduring and niggling mystery. But if I didn’t still carry those marvelous pictures in my mind’s eye, I might never have seen the Higgins museum.

The subject remains fascinating and there are plenty of other places with objects worth seeing, just not so close to home.